Did you just try to call my mobile?  Did you interrupt my day trying to qualify me as a lead? I think you need to know something right now. Stop calling me.  Here are three reasons to rethink making that phone call.

Reason #1:  This isn’t the right time

First, I recognize that at sometime you will need to call someone on the phone and qualify the lead out.  However,  calling randomly at various times doesn’t work.  Luckily, there is research to help you figure out when and how many times you should call.

Since 2012, there has been a strong push to qualify leads quickly, which has led to the formation a new industry called lead response management. Lead response management follows the principle that you should contact a prospect as quickly as possible after they have completed an action such as submitting a form online.  A 2009 study done at the Kellogg School of Management supports this methodology.  The study showed that the odds of qualifying a lead decreased over 6 times in the first hour. The study showed that you have the best chance to qualify any prospect is within the first 5 minutes.  Thus, to qualify a prospect, it is best practice to call ASAP!  The same study showed that after 20 hours, every additional call actually decreases the chance that a prospect will qualify a lead. So, its not a good idea to keep calling day after day. What the Kellogg study didn’t cover was whether or not you could warm up leads again using methods other than the phone.

Best bet is to reach the prospect within the first hour

Notice the chance to qualify a lead decreases 4 times when waiting from 5 minutes to 10 minutes. 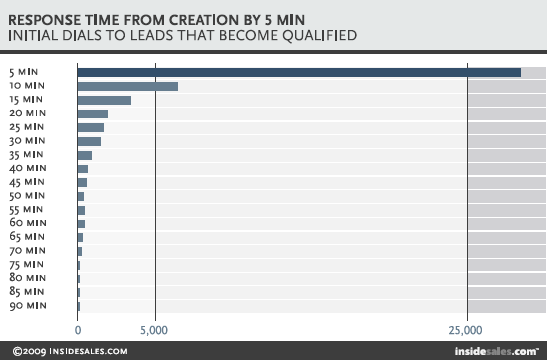 Best time to contact a prospect isn’t around lunch, but the beginning and end of the work day.

Reason #2: You must have called the wrong number

A 2012 Pew Research Study found 68% of mobile owners receive one or more unwanted sales or marketing calls; and a ‘lucky’ 25% of US mobile owners receiving multiple unwanted calls several times a week.  Thus, many people are reluctant to give out a real phone number when completing a form online.  In fact, it’s the most lied-about bit of information a prospect provides. A 2008 MarketingSherpa report states that prospects are more likely lie about their phone number (62% of the time) than their email address (31% of the time) or job title (43% of the time). Unfortunately, most marketers always ask for a phone number on online forms.

Consider changing your best practice ask for phone number only on a select number of forms. For example, you could ask for a phone number on a demo request or product datasheet rather than on a blog post or whitepaper.  This reason to remove the phone number is not to shorten the form (there are no studies showing a shorter form will keep prospects from putting false information), but to indicate your intentions.  Working with lead response management, you can focus your campaigns to require the phone number when you are ready to call them.

Reason #3:  Could you just send me a text instead

If you are seeking a younger audience, you might find it easier to reach them using SMS rather than calling them.  Pew research in 2014 showed that 90% of all adults own a mobile phone and for adults age 18 to 29 the number jumps to 98%.  Some 79% of mobile owners use text messaging regularly. A 2011 Pew report found that 31% of Americans preferred text to voice calls; by 2014, a Harris Interactive study showed that figure at 64%.  Also, there has been a sharp decline in voice usage on mobile devices.  A recent UK study showed the average monthly minutes per person dropped from 250 minutes in 2008 to just 203 minutes in 2013.  All indications show that while more people have mobile phones than ever before, people spend less time making phone calls on them.  If you plan to contact them, try the alternatives like SMS or email before making that phone call.